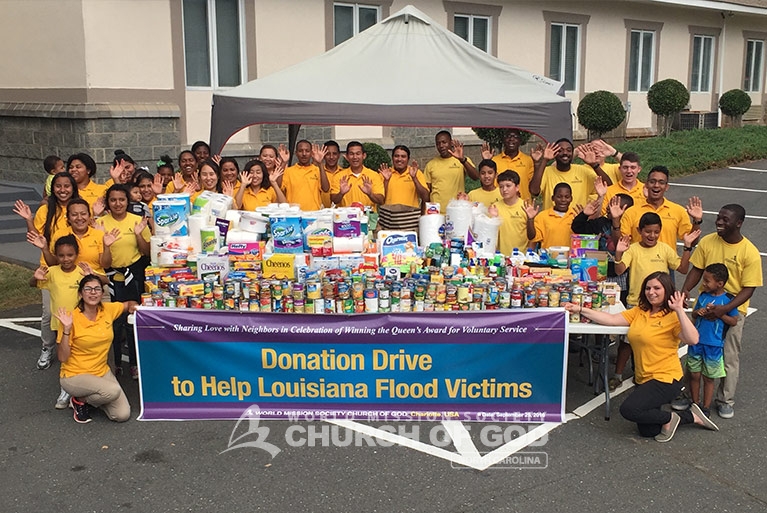 The Church of God in Charlotte united with 24 other churches on the East Coast and the Caribbean for the East Coast Volunteer Service Day 2016 on September 25th. Some locations hosted environmental cleanups, appreciation dinners, visits to the elderly, and provided assistance at charity walks. Meanwhile, volunteers in Charlotte hosted the Donation Drive to Help Louisiana Flood Victims.

Last month, more than 30 inches of rain fell in 15 hours in Louisiana causing great devastation. The severe flooding damaged more than 40,000 homes. Approximately 7,000 people had to seek emergency shelter. And even more catastrophic, the flooding took the lives of more than a dozen people. The Red Cross called it the “worst natural disaster to strike the United States since Hurricane Sandy,” according to CNN reports.

Though more than 800 miles away, the Church volunteers in Charlotte eagerly wanted to help their fellow Americans in need. Approximately 45 volunteers participated in theDonation Drive to Help Louisiana Flood Victims. While a group collected donations brought directly to the church, others went throughout Charlotte. They went house to house and business to business collecting necessary items.

The other groups went to numerous businesses and even door-to-door in the surrounding neighborhoods. And thankfully, the community responded. Not only did many people donate but they were even impressed that volunteers came directly to their homes and businesses to collect the donations.

Altogether, volunteers collected approximately 1,000 pounds of items. People donated everything from toiletries to non-perishable canned food to clean clothes. The Church of God is working with the American Red Cross to ship the items to Louisiana.

Despite the hot weather, and having to transport all the collected items as they went door-to-door, volunteers were grateful for the opportunity to carry out the task. But overall, they were especially thankful for getting such a positive response from the community. The task was challenging but the volunteers were happy knowing their labor was not in vain.

“We are just so thankful to help Louisiana. We hope that all those who receive the donations also receive hope,” said one of the church volunteers.

Not only in Charlotte but all around the world, the Church of God members have an unceasing desire to serve the community. This comes from their desire to spread the love of Christ throughout the world.

The East Coast Volunteer Service Day 2016 was part of a multi-state effort to raise consciousness on the importance of volunteerism. This campaign comes on the heels of the Church of God receiving the Queen’s Award for Voluntary Service in the United Kingdom. It’s the most prestigious award for volunteer activities in the U.K. Moreover, receiving this award inspired millions of Church of God members around the world to recommit themselves to serving their local communities.