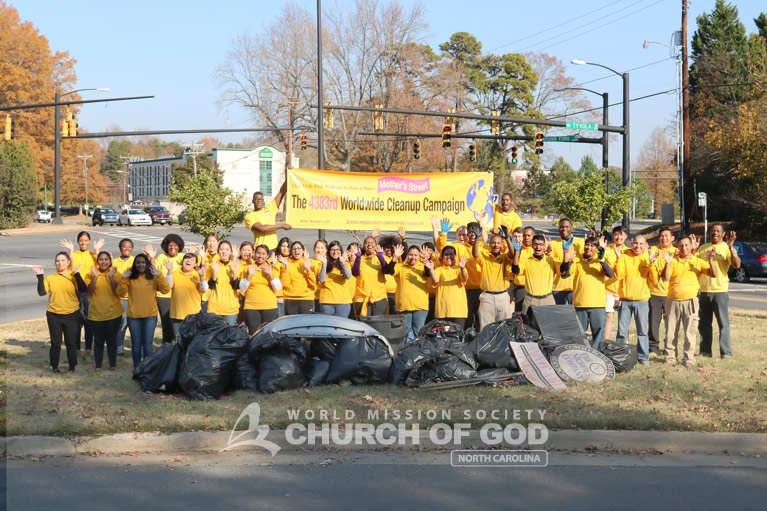 A mother is said to be the glue that holds a family together. When a mother is home, all matters go well and the house is kept neatly organized. Church of God members understand that the source of such maternal qualities can be found in God the Mother. Hence, with the heart of Heavenly Mother, volunteers in Charlotte and Durham made a firm resolution to clean up their own communities, and inspire their neighbors to do the same.

However, this initiative did not only take place in North Carolina. In fact, the cleanups are part of a worldwide collaboration of more than 6,000 World Mission Society Church of God locations called “Mother’s Street.” Throughout the whole world, members resolved to clean streets and parks totaling 25,000 miles–just over the circumference of the earth.

“Mother’s Street” started on November 19 and ended on December 3. Members in 175 countries where the Church of God is located participated in the global cleanup campaign. Through such a widespread effort, volunteers delivered a sense of health and happiness to their neighbors by tidying up their communities with a mother’s love.

Locally, volunteers in Charlotte and Durham gladly responded to the opportunity to spruce up their community. In Charlotte, members geared up to clean up a one mile stretch of Tyvola Road. Around 40 volunteers gathered together on a clear and pleasant Sunday morning to hash out the plan for cleaning the area. Beginning at the intersection of Nations Ford Road, they started picking up trash, and ended at the intersection of S Tryon Street.

Group shot of Church of God volunteers during “Mother’s Street” in Morrisville.

Group shot of Church of God volunteers during “Mother’s Street” in Charlotte.

Volunteers cleaning up a greenway path in Morrisville to fulfill their goal for “Mother’s Street.”

Durham Church of God members happily cleaned up trash from a greenway path in Morrisvile, NC.

Church volunteers in Charlotte cleaning up Tyvola Road for the “Mother’s Street” movement.

Members of the Church of God swarmed Tyvola Road in Charlotte to sweep it clear of trash.

The members decided to divide themselves into two groups so they could equally cover both sides of the street. The members’ faces seemed to be glowing with excitement as they began to start their mile long journey of cleaning.

One member stated, “We are doing this with our members from locations all over the world to fill 25,000 miles with joy, passion, and life, to change the world into Mother’s Street, a place of warmth and peace like a mother’s embrace!”

Members picked up all types of debris and trash, such as car parts and tires from abandoned vehicles, old metal signs, bottles and broken chairs. In all, the members collected 34 bags of garbage. Moreover, the mound of bulky trash and car pieces totaled 779 pounds.

The Church of God in Durham also made a big difference in their community, cleaning 3 miles of greenway paths in Morrisville and collected 20 bags of trash. They worked together with the town of Morrisville to fulfill the goal. Kyle Cooper from Morrisville’s Department of Parks and Recreation was ecstatic with the effort of the volunteers. To learn more about participating in a Church of God volunteer service, please don’t hesitate to contact us.
Check out “Mother’s Street” in the news!